I’m so glad Christmas is over. I don’t celebrate the holiday, but I’m glad it’s over.

I suppose many people would mistake my dislike for Christmas and refusal to celebrate it as being “Grinch-like.” Or “Scrooge-esque.” Or “anti-Jesus-y.” Or some other similar sentiment. But it’s not like that.

There are three main reasons why I do not celebrate Christmas:

I don’t have anything against other people who choose to celebrate Christmas. I just don’t do it.

It doesn’t mean I declare, “Bah! Humbug!” or give a Grinch-like scowl when someone wishes me a Merry Christmas (or Happy Holidays).

This doesn’t mean that I hate watching Christmas movies. Many of them I actually enjoy, if I can get past the “Let’s pretend that Christmas is about love and peace and joy as we wrap meaningless toys and useless presents that we bought for people who don’t need or want them anyway, half of which we bought in a ‘let’s-give-thanks-for-our-blessings-then-rush-out-to-buy-more-useless-crap’ Thanksgiving sale.”

But in spite of my personal attitude about Christmas, I don’t look down my nose at those who celebrate. Neither do I demand that Christmas decorations be taken down, or insist the city give equal representation to all religious or non-religious views when they do their yearly holiday decorating around town.

When someone wishes me “Merry Christmas,” I don’t go into a tirade about how Jesus wasn’t born on December 25th, but a lot of pagan “gods” were, and when people are celebrating Christmas, what they are really observing is basically (among other things) Saturnalia, an ancient pagan celebration that has nothing whatsoever to do with Christianity or with Jesus Christ.

But I simply smile and say, “Thank you,” wish them a good day, and go my way.

There’s no need to be either nasty or preachy to people. I just don’t celebrate.

The deeper reasons are hard to muck through. It’s like trying to swim across the ocean in the middle of a hurricane. It likely has to do with half-remembered memories of rituals that parts of me insist are true, and other parts insist are not true, but it’s stressful to think about and usually leads to a bad headache and an extra helping of depression, so I generally try to not think about it.

The other reasons for my depression are what I call “surface” reasons, but they aren’t surface reasons because they are emotions that are easily dismissed. They are simply more easily defined and easier to understand than the deeper reasons, and so that’s why I call them “surface.”

I simply don’t have a lot of happy memories surrounding Christmas, surface or not. The same stress and abuse and ugliness that was my life the other days of the year, was still around during Christmas, but the forced cheer and loveliness and the “Norman-Rockwell-All-American-happiness” was slopped on extra-thick, creating unrealistic and completely unobtainable expectations of a “Merry Christmas” that fell woefully short of what was actually going on in my life; therefore, since expectations were higher, the fall was harder.

These expectations were unreasonable mainly due to all the abuse that we endured. The expectation was for everything to be “perfect”: clothes, hair, house, presents, food, and the perfectly painted smile on my rosy young face. Sure, the presents were nice, when I remember getting them. I was truthfully thankful for them. But on holidays (as with on other special days and on vacations, but that’s another post for another day), my mother was especially prone to agitation and anger, meaning that we were especially prone to being beaten. So I would go from being beaten and trying to not cry (because crying only prolonged the beating), to being given presents to open and being expected to have a lovely smile pasted on my face (and if I didn’t have that smile along with a believable laugh of delight, I’d get another beating). The shift from one extreme to the next was my normal day-to-day, but mixed in with the unrealistic expectations of the  “perfect Christmas holiday” that my mother tried to create, the practically bi-polar swings were too much. The same was true of other special days, too, like birthdays, but Christmas was especially bad, so I did what I learned: I dissociated. To survive, I shut down emotionally and mentally and went on “automatic.” I went through the motions so I could survive through the next day, when the fake smiles didn’t have to be so large and the false laughter didn’t have to be so loud on that one day of the year when there were such high merry expectations.

So even though I’ve grown up and changed routines and learned new ways of doing things, the memories of Christmases past still haunt me. I miss the peace and joy and love this season is supposed to bring that I never had (but had to pretend to have) with my family as a child.

Yes, I have peace love and joy with my husband and children now. But, as awful as this might sound to some, having my own family that I’ve built now — my husband and my children — will never replace the family — in particular, my mother and father and brother — that abuse and lies took away from me. I don’t know that I ever had that family, anyway. Certainly not with my mother, and certainly not with my father. So as far as they are concerned, it feels as if I’m mourning the family that I never had. But I thought I had a family in my brother at least, until several years ago, anyway. But lies and hurt and false accusations came between us, and I realized what I had already come to know: I have no family except the one I have built for myself. My husband and my children. That’s it. And I am thankful for this, but it doesn’t make up for the pain of the one I have lost and the one I never had.

So, for me, the Christmas season seems more like a mourning that I’m never able to fully articulate, and certainly not express without mis-judgement of some sort. So my mourning is doled out year-by-year, administered to me one miserly bit at a time so that it won’t bother those around me. Life has taught me that, unless one is prone to depression themselves, not many people want to hear the words, “I’m depressed.” Or, “I’m feeling down.” So, I generally try to keep it to myself. It’s easier to keep those thoughts to myself, than it is to give utterance to the words that fall on deaf ears.

I keep thinking it’ll get better with each passing Christmas season, but it doesn’t, really. I think I’m pretty good at hiding it, though, for the most part. At keeping that pain and depression buried away inside a box (sometimes that box is wrapped in brightly-colored Christmas paper), stuffed in a closet in a faraway room of my mind, only to be looked at occasionally and mused over, when no one is paying attention. To cry over when everyone is asleep. Being raised in an abusive household taught me to do these things, and I haven’t quite been able to get out of the habit. Every time I try to change this habit, all the hurt and depression comes pouring out of the box, spilling all over everywhere, turning into rage and anger, and ruining things. So I try to keep the lid on as often as possible.

On the positive side, I do get better at finding other things to fill my time, however, so that my depression is relatively mild now, and only lasts several days instead of a period of time that lasts for several weeks, merging with the typical Halloween and Thanksgiving depression.

But the adage that “time heals all wounds” simply isn’t true. Some wounds we just learn to live with.

So, I’m sure glad the “holiday” season is over with for now, and I’m looking forward to the new year.

As far as what the new year holds for me, I’m not sure, of course, but I know that my Heavenly Father has me in His hands. He’s done an amazing work within me this past year, and although I’ve got a long way to go (don’t we all?), my Father has brought so much healing to me this year as He has taught me to walk in obedience to His Word and in submission to His will. And I know that whatever this next year holds, He’s got it under control.

Regardless of what this past year has brought to you, I pray the new year brings you closer to the Heavenly Father, and that you find blessings and much healing in your life.

I am a survivor of child abuse, SRA, and TBMC, programmed from a young age, eventually leading to working alongside Satan’s spiritual hierarchy. However, I was saved by the grace of God through Jesus Christ, and now serve my Heavenly Father, doing my best to expose the works of the enemy. 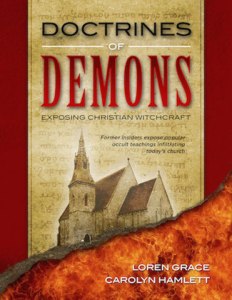